Hannah Wilson M.A.
Uncovering Sobibór: Archaeology, Artefacts and Representation
Holocaust archaeology has arguably become one of the most crucial aspects within contemporary memory and cultural studies. This paper will examine the impact of the archaeological findings at the site of Sobibór death camp in Eastern Poland.
2007, Polish archaeologist Wojciech Mazurek and Israeli archaeologist Yoram Haimi began working together, picking up where the previous investigations left off. Dutch archaeologist Ivar Schute also joined after a huge number of items from the Netherlands were uncovered. Consequently, this ten-year period of excavations has been shaped by a variety of different actors, bringing with them the influences of different supporting organisations and institutions, and thus framed by international memory politics.
This paper seeks to outline the reasons for the second phase of archaeological excavations and discuss their impact on the memory and historiography of the site. Collectively, the unearthing of artefacts at the site has played an important role in the public perception of the camp. Therefore, the paper will analyse the most significant findings, and the various types of artefacts uncovered there. Most important is the small selection of artefacts that give some indication as to the identity of the victim, with either a name or other recognisable feature, and have thus led to the discovery of living family members; specific examples of these will be also present in this paper.
Biography
Hannah Wilson, MA is a graduate of the Weiss-Livnat International MA program in Holocaust Studies at the University of Haifa (Israel). In 2016, began her PhD research on the material memory of Sobibór at the Department of History, Nottingham Trent University (UK), funded by the AHRC Midlands4Cities Award. She is a former EHRI fellow, and from 2014 onwards, she has participated as a research student at the archaeological excavations at Sobibór and Treblinka camp sites in Poland. In 2019, she was awarded a research grant by the Fondation pour la Mémoire de la Shoah in Paris.
Bitte melden Sie sich vorab per Mail zum Vortrag an unter ns-doku@krefeld.de an. Wir senden Ihnen dann die Zugangsdaten zu. 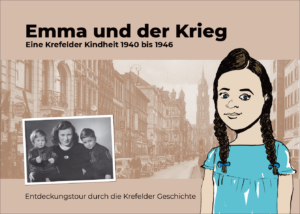